2nd Succeed hackathon at the University of Alicante

Is there anyone out there still thinking that a hackathon is a malicious break-in?

Far from it. It is the best way for developers and researchers to get together and work on new tools and innovations. The2nd developers workshop / hackathon organised on 10-11 April by the Succeed Project was a case in point: bringing together people to work on new ideas and new inspiration for better OCR. The event was held in the Claude Shannon room of the Department of Software and Computing Systems (DLSI) of the University of Alicante, Spain. Claude Shannon was a famous mathematician and engineer and is also known as the “father of information theory”. So it seemed a good place to have a hackathon! 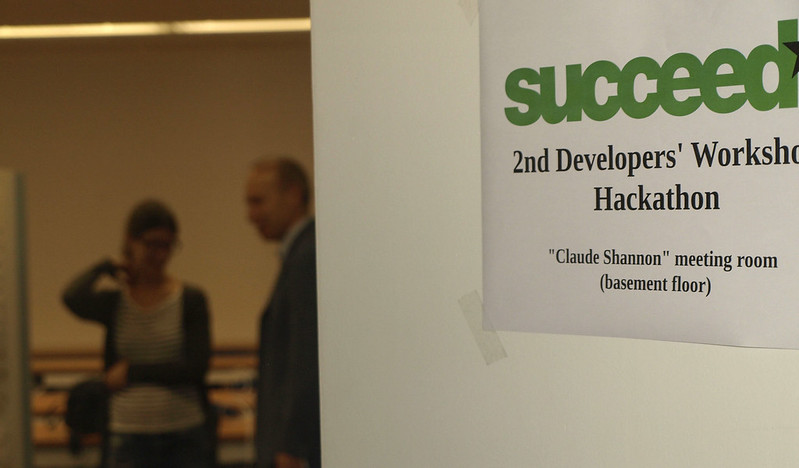 Clemens explains what a hackathon is and what we hope to achieve with it for Succeed.

Same as last year, we again provided a wiki upfront with some information about possible topics to work on, as well as a number of tools and data that participants could experiment with before and during the event. Unfortunately there was an unexpectedly high number of no-shows this time – we try to keep these events free and open to everyone, but may have to think about charging at least a no-show fee in the future, as places are usually limited. Did those hackers simply have to stay home to fix the heartbleed bug on their servers? We will probably never find out.

Nevertheless, there was a large enough group of programmers and researchers from Germany, Poland, the Netherlands, and various parts of Spain eager to immerse themselves deeply into a diverse list of topics. Already in the introduction we agreed to work on open tools and solutions, and quickly identified some areas in which open source tool support for text digitisation is still lacking (see below). Actually, one of the first things we did was to set up a local git repository, and people were pushing code samples, prototypes, and interesting projects to share with the group during both days. 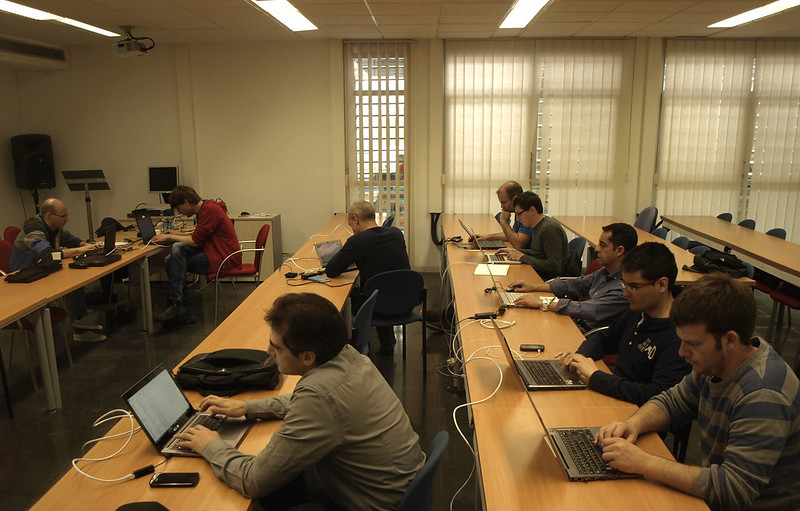 In answer to that question, Jesús Dominguez Muriel from Digibís (the company that also made http://www.digibis.com/dpla-europeana/) started an investigation into open source OCR tools and frameworks. He made a really detailed analysis of the status of open source OCR, which you can find here. Thanks a lot for that summary, Jesús! At the end of his presentation, Jesús also suggested an “algorithm wikipedia” – I guess something similar to RosettaCode but then specifically for OCR. This would indeed be very useful to share algorithms but also implementations and prevent reinventing (or reimplementing) the wheel. Something for our new OCRpedia, perhaps?

A method for assessing OCR quality based on ngrams

As it turned out on the second day, a very promising idea seemed to be using ngrams for assessing the quality of an OCR’ed text, without the need for ground truth. Well, in fact you do still need some correct text to create the ngram model, but one can use texts from e.g. Project Gutenberg or aspell for that. Two groups started to work on this: while Willem Jan Faber from the KB experimented with a simple Python script for that purpose, the group of Rafael Carrasco, Sebastian Kirch and Tomasz Parkola decided to implement this as a new feature in the Java ocrevalUAtion tool (check the work-in-progress “wip” branch). 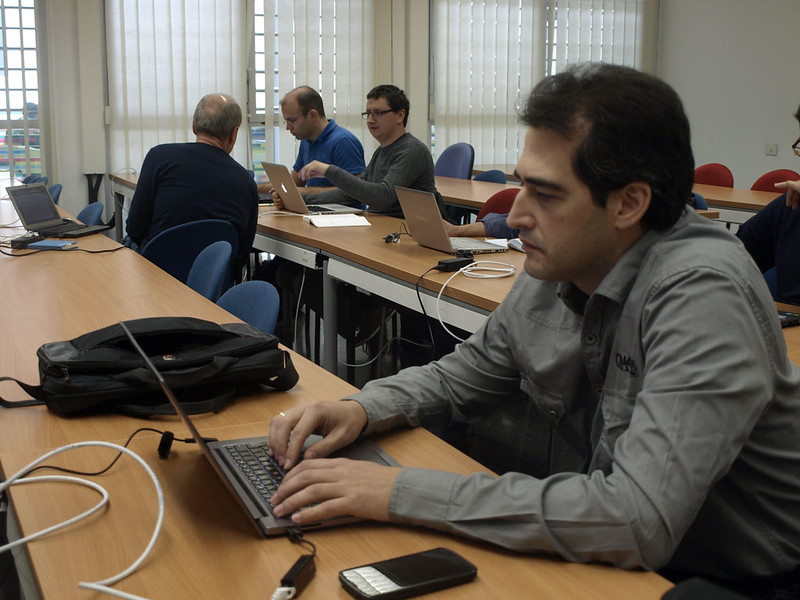 Jesús in the front, Rafael, Sebastian and Tomasz discussing ngrams in the back.

Another very promising development was started by Antonio Corbi from the University of Alicante. He worked on a software to align plain text and segmentation results. The idea is to first identify all the lines in a document, segment them into words and eventually individual charcaters, and then align the character outlines with the text in the ground truth. This would allow (among other things) creating a large corpus of training material for an OCR classifier based on the more than 50,000 images with ground truth produced in the IMPACT Project, for which correct text is available, but segmentation could only be done on the level of regions. Another great feature of Antonio’s tool is that while he uses D as a programming language, he also makes use of GTK, which has the nice effect that his tool does not only work on the desktop, but also as a web application in a browser.

OCR is complicated, but don’t worry – we’re on it!

Gustavo Candela works for the Biblioteca Virtual Miguel de Cervantes, the largest Digital Library in the Spanish speaking world. Usually he is busy with Linked Data and things like FRBR, so he was happy to expand his knowledge and learn about the various processes involved in OCR and what tools and standards are commonly used. His findings: there is a lot more complexity involved in OCR than appears at first sight. And again, for some problems it would be good to have more open source tool support.

In fact, at the same time as the hackathon, at the KB in The Hague, the ‘Mining Digital Repositories‘ conference was going on where the problem of bad OCR was discussed from a scholarly perspective. And also there, the need for more open technologies and methods was apparent:

#digrep14 I'm strangely unconcerned about poor OCR. So long as scholars know the quality, they should know what research can & can't be done

@j_w_baker Fully ACK. But they need open tools and transparent methods for that. We’re on it! https://t.co/CI3m64fnb0

One of the many technologies for text digitisation that are available in the IMPACT Centre of Competence for image pre-processing is Border Removal. This technique is typically applied to remove black borders in a digital image that has been captured while scanning a document. The borders don’t contain any information, yet they take up expensive storage space, so removing the borders without removing any other relevant information from a scanned document page is a desirable thing to do. However, there is no simple open source tool or implementation for doing that at the moment. So Daniel Torregrosa from the University of Alicante started to research the topic. After some quick experiments with tools like imagemagick and unpaper, he eventually decided to work on his own algorithm. You can find the source here. Besides, he probably earns the award for the best slide in a presentation…showing us two black pixels on a white background!

All in all, I think we can really be quite happy with these results. And indeed the University of Alicante also did a great job hosting us – there was an excellent internet connection available via cable and wifi, plenty of space and tables to discuss in groups and we were distant enough from the classrooms not to be disturbed by the students or vice versa. Also at any time there was excellent and light Spanish food – Gazpacho, Couscous with vegetables, assorted Montaditos, fresh fruit… you don’t make hackers happy with just pizza anymore! Of course there were also ice-cooled drinks and hot coffee, and rumours spread that there were also some (alcohol-free?) beers in the cooler, but (un)fortunately there is no evidence of that…

If you want to try out any of the software yourself, just visit our github and have go! Make sure to also take a look at the videos that were made with participants Jesús, Sebastian and Tomasz, explaining their intentions and expectations for the hackathon. And at the next hackathon, maybe we can welcome you too amongst the participants?