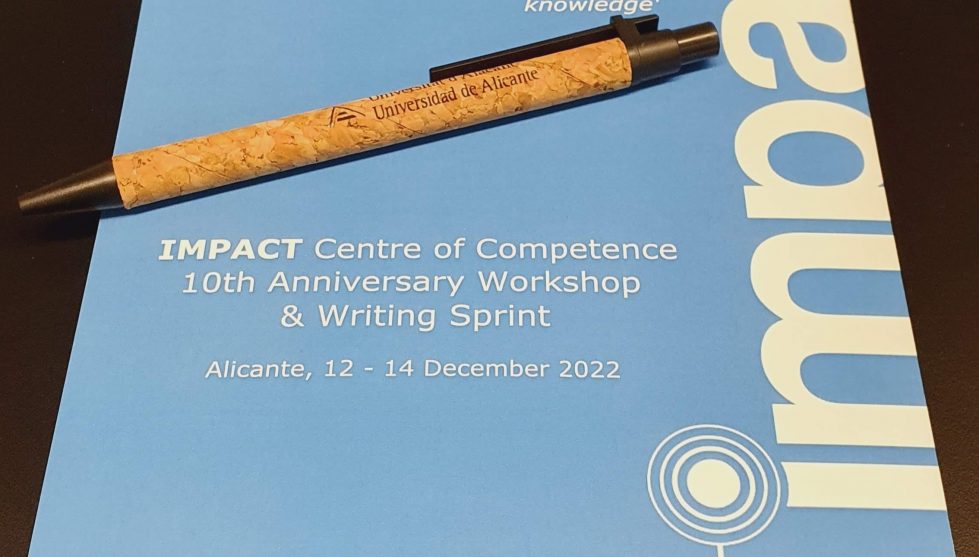 On 12th December 2012, the IMPACT Centre of Competence, built upon the results of the namesake FP7-funded project, was officially launched. The initial aim of IMPACT was to “make digitisation better, faster and cheaper” and, during these 10 years, IMPACT has been providing support to institutions, researchers and individuals in their digitisation programmes, facilitating the active engagement with the network and fostering the sharing of best practice.

In order to celebrate the 10th Anniversary of IMPACT, the University of Alicante hosted on 12-14 December, 2022 a birthday workshop and writing sprint with the aim of creating a collaborative white paper entitled Sharing and Sustaining Digitisation Knowledge and with focus on the main challenges faced by researchers and practitioners of the main stakeholders groups of IMPACT: Computer Scientists, (Digital) Humanists and Cultural Heritage Institutions.

The experts divided into 4 working groups focused on relevant topics in the digitisation field:

During the first session, experts identified the main challenges faced in each topic, which were voted afterwards in a plenary session, resulting in the following 6th most relevant topics:

The welcoming session was followed by a keynote panel in which Apostolos Antonacopoulos, Ines Vodopivec, Milena Dobreva and Neil Fitzgerald presented the main achievements of their institutions in digitisation during the past 10 years and the plans for the upcoming years. A cocktail was offered by IMPACT to close the Birthday Celebration.

The second day started with a short discussion on the challenges selected during the first session. Following this discussion, a series of lightning talks introduced the second writing sprint session. These talks were delivered by:

After these inspirational talks, the participating experts divided into groups again and started to write the first draft of the white paper working on the theme definition, the key challenges, the state of the field, etc.

Following a light lunch, Gustavo Candela guided the participants in a visit through Biblioteca Virtual Miguel de Cervantes headquarters, where his colleagues showed the tasks and editions they are currently developing, before coming back to the writing sessions.

The third day of the workshop was devoted to the editorial team to clean up the document and put all things discussed in the previous days together.

We are looking forward to seeing the resulting White paper of this wonderful workshop!